From AllStarLink Wiki
Jump to navigation Jump to search

This page shows the results of analyzing the audio response through an original through-hole VOTER board. As most of the background engineering on the design was lost with Jim's passing, some reverse engineering is required to dig deeper in to the design.

The data presented here analyzes the audio response between different sections of the various circuits in both the audio path, and the squelch/RSSI path.

If you refer to the schematic, you will note that there are two Audio Select lines (ASEL1/ASEL2) connected to the 74HC4053, which determine how audio is routed through the VOTER board.

On initial boot (during the bootloader phase), ASEL1 and ASEL2 are Low. With the firmware running, default options, no host connection, and no GPS, ASEL1 = H and ASEL2 = L, which means that by default the CTCSS Filter is ENABLED and the De-emphasis Filter is ENABLED.

The state of the ASEL lines can be manually overridden by the noplfilter and nodeemp options in voter.conf Documentation. They, obviously, will cause their respective filters to be disabled on the VOTER client they are configured for. NOTE: this is only true if there is a valid host connection.

The VOTER being used was built by VE7FET, and was running Firmware V3.00.

In most cases, "zero" is actually about -15.8dBm, so through measurements would be relative to that. Sorry, I didn't feel like figuring out how to reference the measurement sweeps to zero out that correction.

This is the baseline measurement, with the calibration applied, with the output of the sound card connected to the input, using a 10uF capacitor on the microphone input (DC blocking). 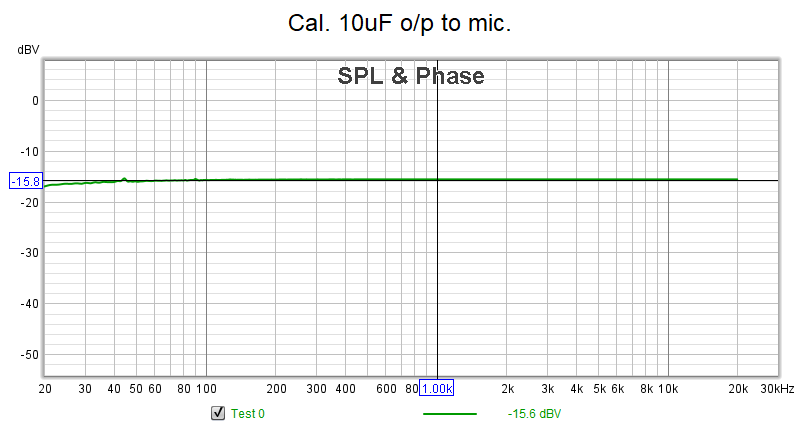 The sweeps presented below should be used as a general representation of the audio characteristics of the path. This is definitely not a scientific, lab-grade experiment. I was more interested in what the relative responses were of various parts of the circuit, as well as the effect and operation of various option settings in the config file (and menus).

Sweeping from Radio DB9 Pin 3 to U4 Pin7. 10uF cap on Mic input of sound card. No host connection. 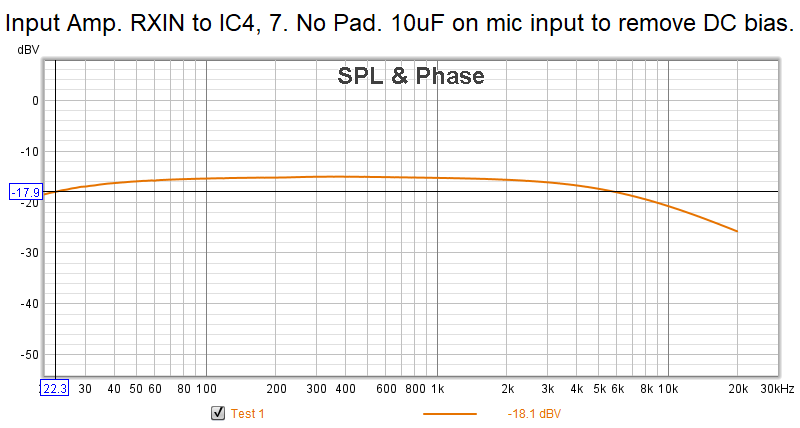 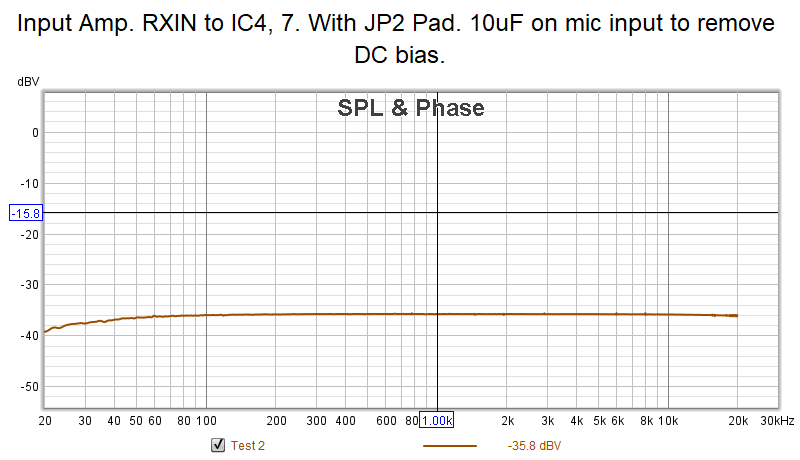 If we do some circuit analysis, this is a first-order active LPF. The corner frequency (3dB point) is set by C29 and R34 (and R33 when the pad is enabled). With C29/R34, the corner frequency works out to be 1/(2*pi*R34*C29) = 7.234KHz. That actually explains why we see a roll off on the upper end in the first sweep (even though the measured 3dB point on that graph is around 5.8kHz, that can likely be explained by C29 tolerance). This is well above the passband of the audio we are interested in (300Hz to 3kHz), so it is fairly irrelevant.

The roll-off at the bottom end of the sweep is likely due to C30.

Note that with JP2 in, the corner frequency of the filter is theoretically shifted to 73kHz... which is why the second sweep shows a flat response at higher frequencies (and the low-end roll off from C30 is still present).

Sweeping from Radio DB9 Pin 3 to U14 Pin 1 to characterize the response of the high-pass CTCSS Filter. 10uF cap on Mic input of sound card. No host connection. JP2 is OUT. 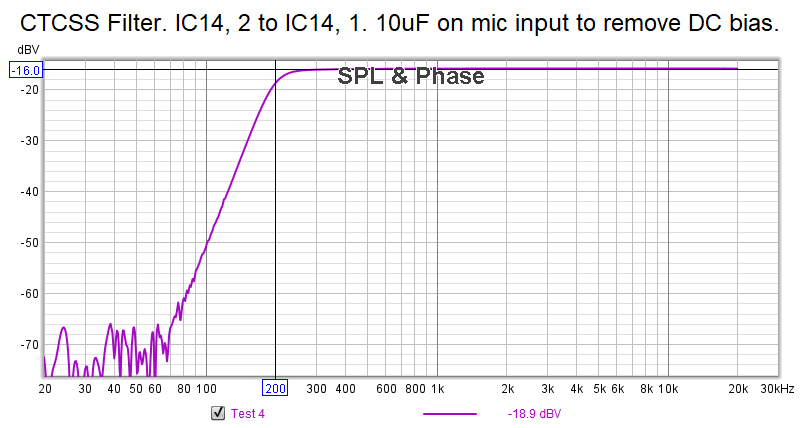 Some reverse-engineering of this filter seems to fit with it being a 6th-order Sallen-Key Butterworth filter. The filter coefficients seem to pretty closely match the resistors being used, when using Fc of 200Hz. 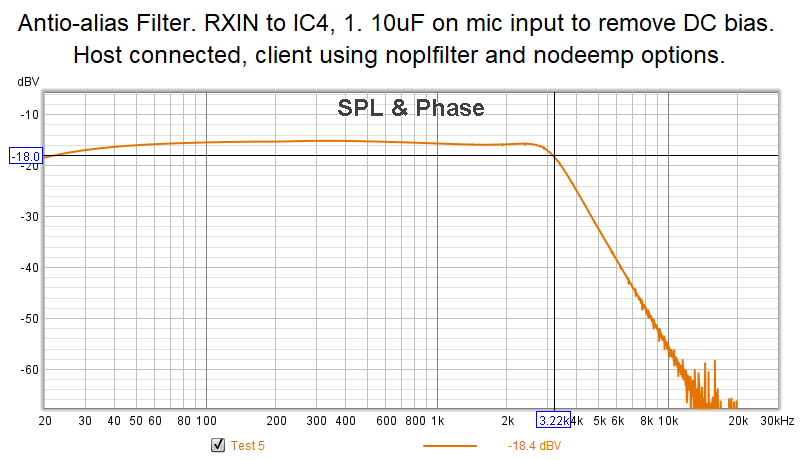 The Anti-alias LPF 3db point is about 3.22kHz. Fairly flat response through the audio pass band (up to 3kHz).

Sweeping from U14 Pin 4 to U4 Pin 1. Just the Anti-alias Filter directly: 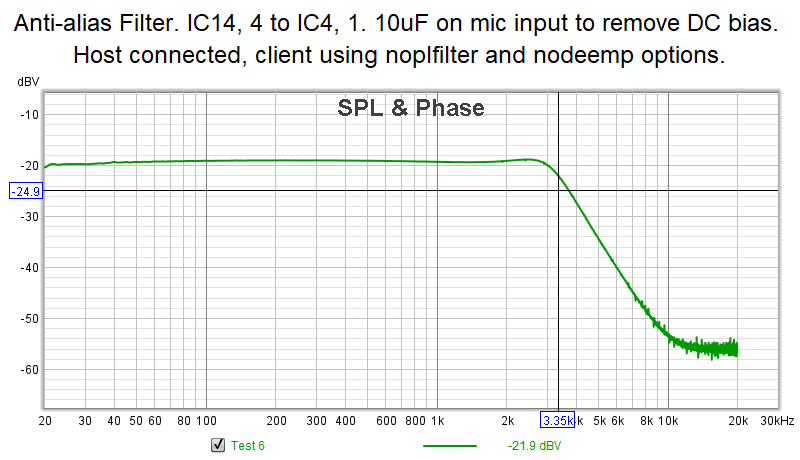 There appears to be some impedance mismatch with the test setup, as there is higher loss observed... but the response is about the same. 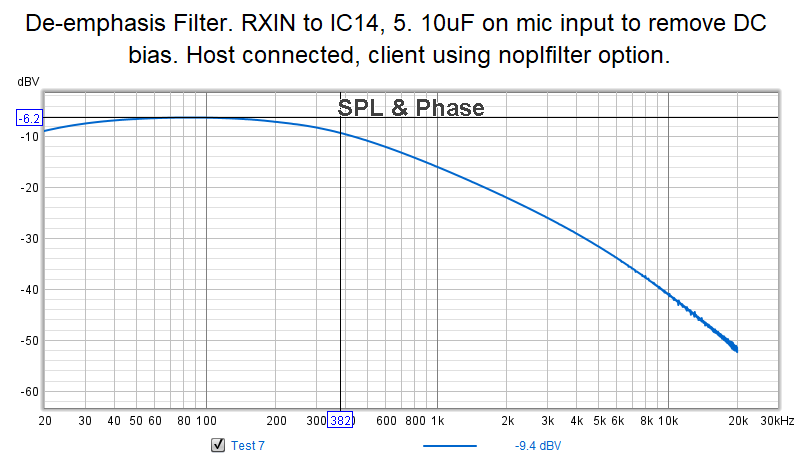 Not the greatest response here.

There seems to be some gain here (note the peak response is about -6.2dBV, not the -15.8dBv we've seen on the other sweeps). The response is also not flat, that is probably some interaction with the input buffer stage.

Tried sweeping the de-emphasis filter directly (U14 Pin 3 to U14 Pin 5), but there was too much loading, and not enough signal was recoverable (probably an interaction with the test setup).

If we do a little circuit analysis here, we can see this is probably a design issue.

So, I would say this is an unfortunate design oversight. The problem is, correcting it in the future would mean incompatibility with all the existing RTCM/VOTER's out there. So, perhaps, there will need to be some thought in adding some options for compatibility with existing hardware, versus deployment on new systems.

You will note the effect of the Anti-alias LPF in the responses at the upper end of the frequency range.

No CTCSS Filter, No De-emphasis Filter 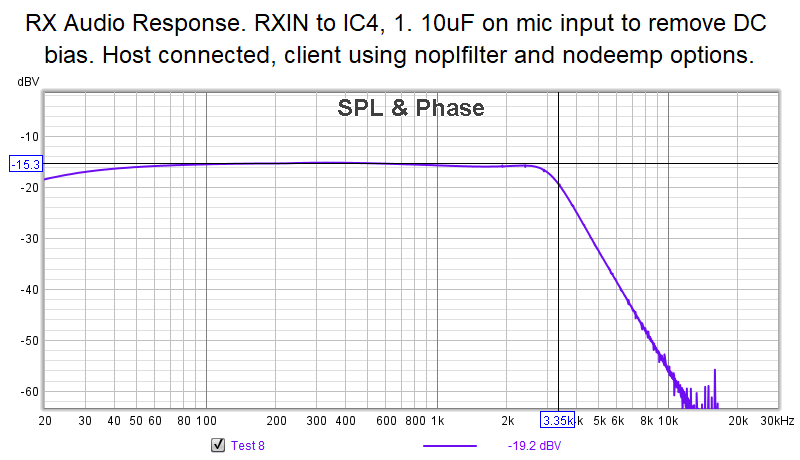 With CTCSS Filter, No De-emphasis Filter 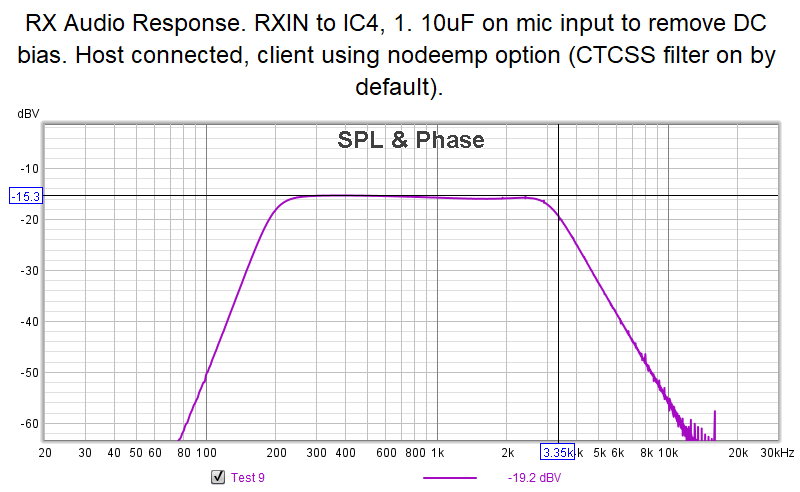 No CTCSS Filter, With De-emphasis Filter 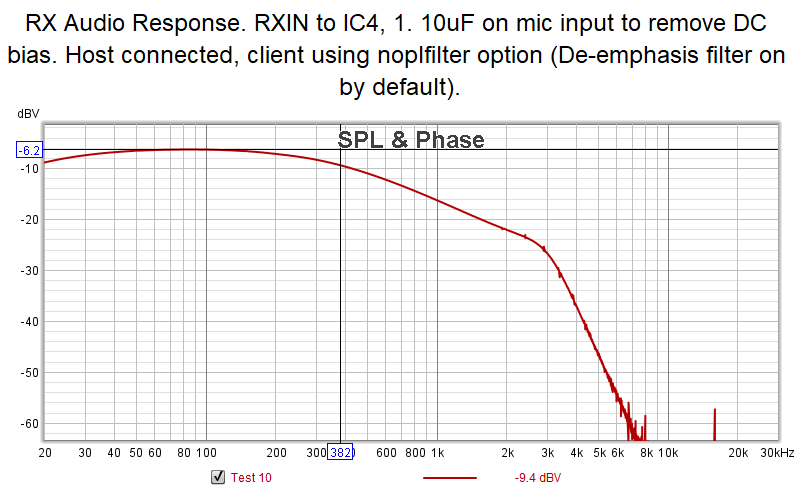 With CTCSS Filter, With De-emphasis Filter 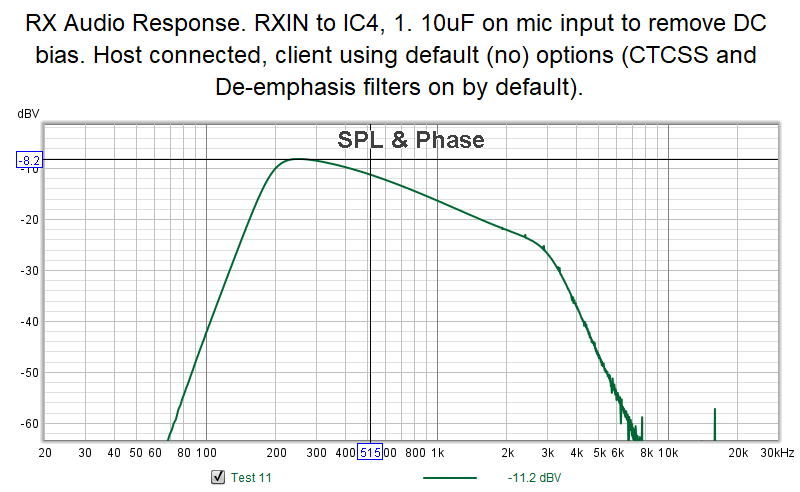 NOTE: this test reveals a 7dB increase in audio level. Likely caused by the De-emphasis Filter response, again. However, on the positive side, we are seeing 7dB/octave de-emphasis from 300-900Hz (which is pretty close to the desired 6dB/octave), 5.8dB/octave from 1kHz to 2kHz, and 4.3dB/octave from 2kHz to 3kHz.

The Output Amplifier (U11) was not swept, as it was not easy to break in to the input for it to inject a signal.

However, we can do some circuit analysis and see that it is another first-order LPF. R59/C60 give it a corner frequency of 10.261kHz. R59/R62 give it a gain of 33, but it is also driven by the TX Level Pot to control the output level. There is likely some low-end roll off from C64.

So, some interesting observations were revealed in these sweeps.

As a result of these observations one should be very careful when aligning their audio levels, and do not change options "on-the-fly" once they are set, as it will have a direct effect on the audio response in to Asterisk. 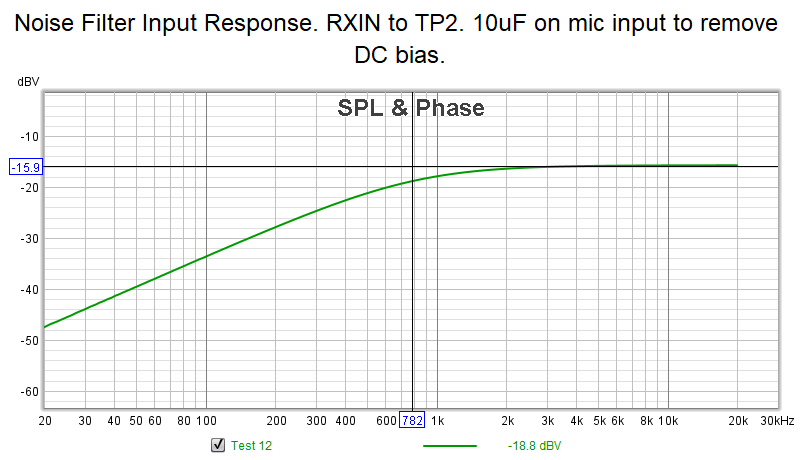 Removing JP1 provides about 33dB of additional loss (padding). The high-pass response is a function of C10 (0.1uF). 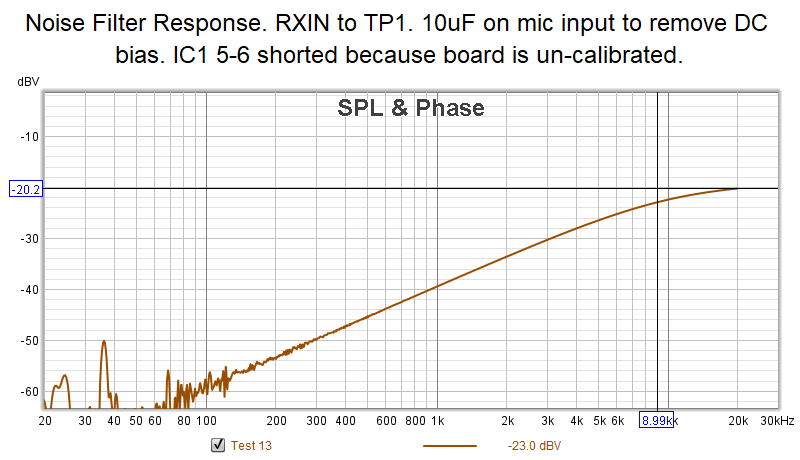 Fc appears to be around 9kHz of the high-pass filter.

As noted in the VOTER System Documentation, this is a high-pass filter used to measure high-frequency noise from the discriminator, in order to determine how quiet (strong) the signal is. The stronger the signal is, the less high-frequency audio components there will be (since the signal will be "quieter"). When this audio is rectified by U2A (and its associated components), a DC RSSI is generated to quantify the signal strength. A DC voltage closer to 0V would be a stronger signal.

In order to sweep audio through app_rpt/Asterisk, we're going to need to calibrate the VOTER. Of course, this is going to be a little tricky, since we aren't actually using a radio with discriminator audio. However, we to have a "white noise" generator we can use to our advantage to simulate that.

Use the white noise generator, and put the VOTER in to Squelch and Diode calibration mode with the appropriate jumpers (with JP1 IN). The board calibrates with a noise value around 61, and about 125mVpp is measured at U2 Pin 5.

Normalize all jumpers settings, reboot the VOTER, restart Asterisk (as a side note, put noplfilter and nodeemp in the client config in voter.conf to get a flat response through the VOTER).

Use the REW signal generator to generate a 1kHz tone (at the nominal -12.06dBv level). Use the RX Level (Main Menu Item 97) display and the RX Level pot to adjust to the 3kHz mark. Measure the level on the Radio DB9 Pin 3 with a scope.

Audio should be repeating through Asterisk, so move the scope to Radio DB9 Pin 2 (TX Audio Output), and adjust the TX Level Pot for the same level measured on the DB9 pin 3.

Switch back to the white noise generator to close the squelch.

You should now have a "calibrated" VOTER/Asterisk system, like you normally would when connected to a repeater. There should be a 1:1 level from input to output (through app_rpt) of the VOTER. Now we can proceed with measuring frequency response.

For this measurement, we want noplfilfer and nodeemp set in voter.conf. This switches OUT both the hardware CTCSS and De-emphasis Filters. This should be a baseline response through app_rpt: 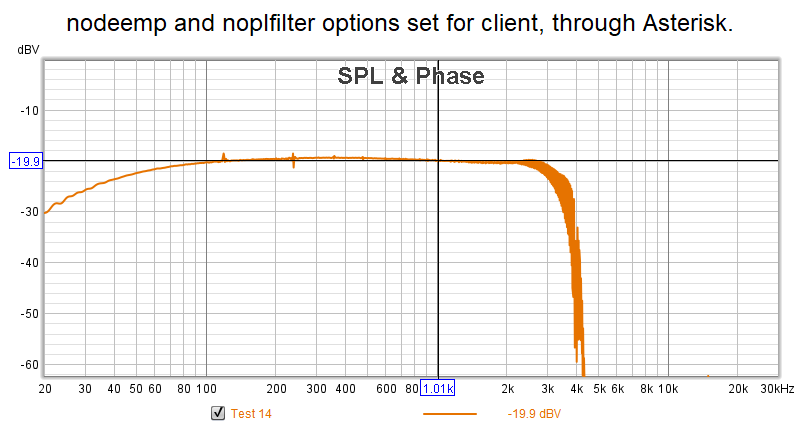 Note that our new baseline relative level is about -20dBv.

Audio pass band response from 300Hz-3kHz is pretty flat. There is some roll off below 100Hz, and it looks like the "brick wall" above 3kHz is probably an effect of the CODEC.

This is the response with the noplfilter option only for the client in voter.conf. Therefore, de-emphasis is ENABLED: 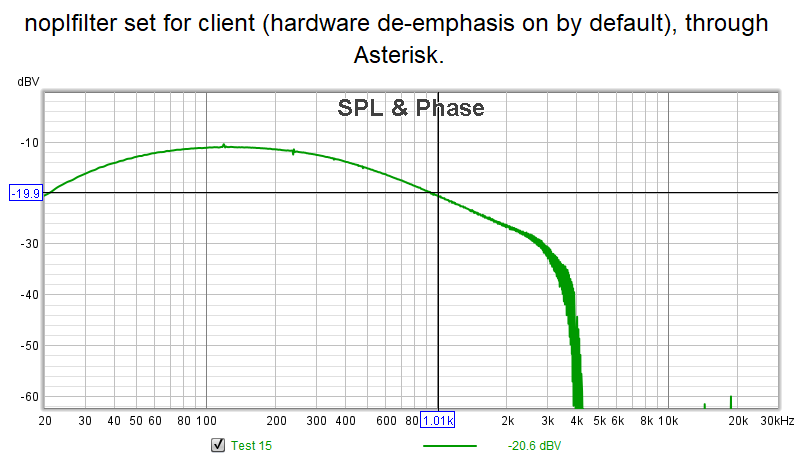 This is the response with the nodeemp option only for the client in voter.conf. Therefore, the CTCSS filter is ENABLED: 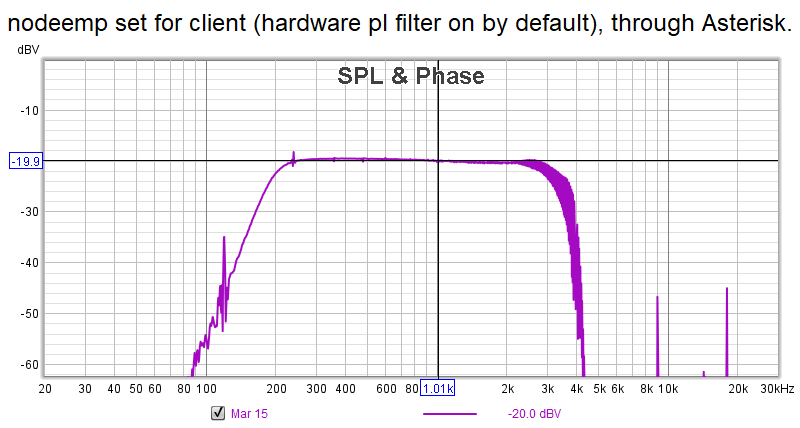 There are a few artifacts in the measurement, but it effectively matches what the sweep of the hardware filter was.

This is the response with no options on the client in voter.conf, effectively the default configuration. Both the hardware CTCSS Filter and De-emphasis Filter are ENABLED: 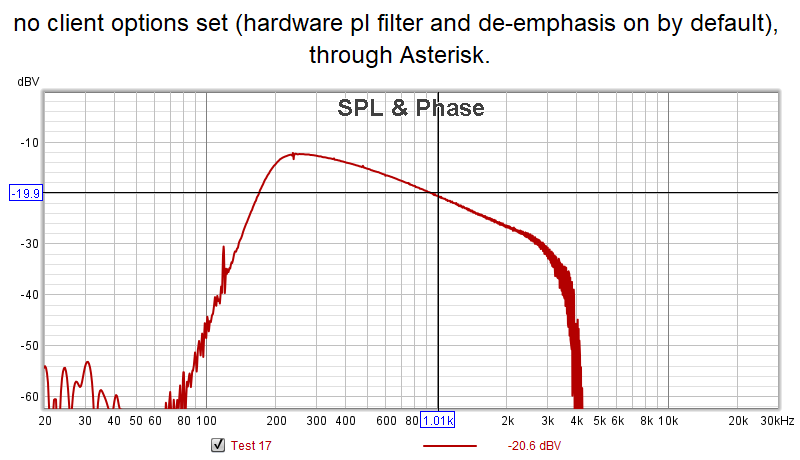 The audio response sweeping through app_rpt/Asterisk is pretty much as expected, reflecting the response seen when sweeping the VOTER hardware directly. The only real difference seen is the "brick wall" above 3kHz, which is likely due to the characteristics of the CODEC being used for the audio transport.

These options are designed to be used with "Duplex Mode 3". In that mode, the actual repeat audio for the repeater attached to the VOTER is done "in-cabinet", that is, audio is routed on the VOTER directly from receive to transmit, without going to the Asterisk host first. Asterisk sends telemetry tones and linked audio to the VOTER to mix in to the transmitter, but the repeat audio doesn't transit the host.

As such, Duplex Mode 3 is designed to use discriminator audio. That audio typically needs to be de-emphasized (and optionally CTCSS filtered), before Asterisk can do stuff with it (repeat it to linked nodes, DTMF decode, etc.). That is where these options, hostdeemp and plfilter come in. When those options are set, they apply software filters to the incoming discriminator audio (from the VOTER), before presenting it to the app_rpt channel driver.

Be forewarned, do NOT mess with the hostdeemp option, if you are not using Duplex Mode 3!! Unpredictable (unwanted) results happen when you have a mismatch between Duplex Mode 3 set in the VOTER, hostdeemp enabled in voter.conf, and duplex=3 in rpt.conf. Having those settings not matched (either all on, or all off) will cause the hardware de-emphasis filter in the VOTER to toggle on and off when either the VOTER restarts or Asterisk restarts. This is definitely NOT what you want!

This is another obscure per-instance option in voter.conf.

This option allows positive and negative floating values (ie 6.0 or -6.5), measured in dB. It will adjust the audio level sent from Asterisk to the transmitter(s) by the desired amount. This was measured and confirmed to be relatively accurate.

The operation of Sawyer Mode was also confirmed in these tests.

Sawyer Mode controls the operation of the hardware CTCSS Filter on the VOTER when Offline Mode is used.

This is contrast to normal operation where entering Offline Mode has no effect on the hardware CTCSS Filter.